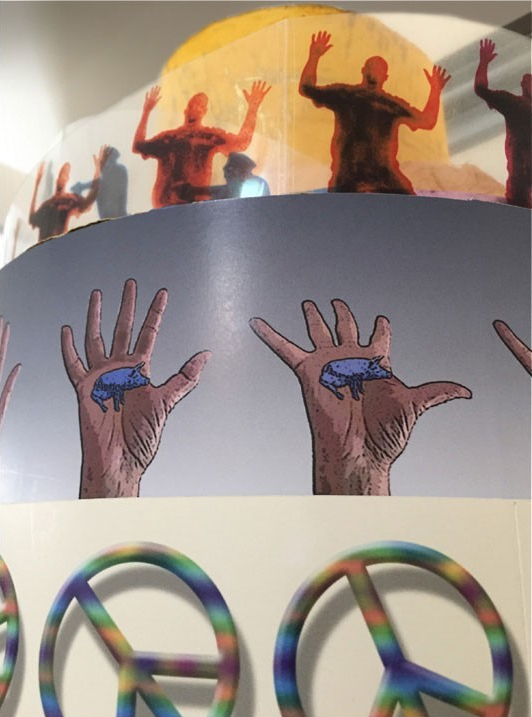 Pictures in a Revolution: A Zoetrope

Our interactive, kinetic sculpture, Pictures in a Revolution, is based on the zoetrope, a pre-film animation device that uses the persistence of motion principle to create an illusion of motion. Inventor, William Horner, called his 1834 creation a Deadalum, or “Wheel of the Devil,” but it was eventually patented as a “Wheel of Life” or “Zoetrope,” a name made up of the Greek root words for “life” and “turning.”

In response to this year's theme, Today is The Shadow of Tomorrow, we have “re-purposed” an antique light & motion device to foreshadow the possibilities in a world without individual or institutional racism and violence. Our zoetrope presents pictures reflecting troubling contemporary issues and contrasts them with others drawn from myth, fables and traditional images used in Diá de los Muertos celebrations. Seen slowly, “frame by frame,” our images seem distinct and acute, but working as a whole, spinning into motion and action, those differences melt into a harmonious “moving picture” of society blending and braiding into one living, evolving entity.

Pictures in a Revolution: A Zoetrope (video)

Created for Today is the Shadow of Tomorrow, SOMArts' 16th Annual Día de los Muertos Exhibition, our interactive, kinetic sculpture, Pictures in a Revolution, is based on the zoetrope, a pre-film animation device that uses the persistence of motion principle to create an illusion of motion.

Between Heaven and Hell

Although the origin of The Long Spoons Parable remains unknown, the story is ancient and it is a folklore mainstay in many spiritual cultures including Hindu, Jewish, Buddhist, and Christian. What these cultures have in common is the practice of communicating difficult truths through story. This parable explains the difference between heaven and hell by means of people forced to eat with long spoons strapped to their arms – too long to reach their mouths. In the realm of Hell, people are unable to bring food to their own mouths with such unwieldy cutlery. They are eternally miserable and starving. In the realm of heaven, by contrast, people are happy, loving and loved, and well nourished even though it is the same setting. Why? They are feeding one another across the table.

We see The Long Spoons as a parable that applies on a grand scale – from market-driven real estate and corporate greed to forced migrations and the extinguishing of minority cultures worldwide. Focusing on our local communities, this parable has something to say about displacement and evictions in formerly stable and vibrant communities and the loss of cultural diversity. Change happens, but it doesn’t have to be hell... everyone has a stake in the future. Greed and self-interest can be exchanged for human kindness and generosity. We must nourish others to be nourished ourselves.

Tonglen is the Tibetan term for “giving and taking” or “sending and receiving.” In this Buddhist practice, one breathes in, imagining and assuming the suffering of others, and breathes out, bestowing happiness and attainment to all beings. Breath and life, as they continue, strengthen the roots we put down. Every breath counts.

This collaborative sculptural installation was originally created for SOMArts 2013 Día de los Muertos, Imagining Time, Gathering Memory. It is the expression of the two artists' interweaving their recent dreams and and an homage to recently lost parents and friends to long illnesses. It is also a meditation on the complex “giving and taking/sending and receiving” process by which memory works in time. We begin with an individual’s memory, moving on to cellular memory, organic memory, genetic memory, memory pathways, and resting with remembrance and memorial. Our metaphor, a living, “breathing” tree, embodies this process in the present with its strong trunk and leaves, as well as the past and future in its breathing roots.

This installation is dedicated to family, friends and all who are engaged in the treatment of life-threatening illnesses. The artists would like to give special thanks to our engineering wizard, Gregory Ward.

To enlarge images below, click on first image and use arrow.

To Feel A Whisper

As my father neared the end of his life, his mode of expression simplified. He found song to be the best way to express himself and he sang more than he spoke. My video altar focuses on this, simply and personally. This homage is a departure from my usual conceptual or topical work, but simplicity often hosts vast unseen universes.

This installation also contains an interactive portion. I ask my visitors to tell me their own story about calling upon the spirits to face the future. They are asked to write or illustrate in an oversized book. A bowl of feathers is placed as an offering and visitors may take one, dedicate it, and let it catch a breeze... Robert George Addison made the word better one small deed at a time.

Growing up in a large struggling immigrant family, my father felt marginalized. He vowed to overcome this and to make it easier for others, too. He did this on an individual level every single day of his life. Dad treated everyone with the respect he would accord himself. As a young doctor, for instance, he promoted immigrants, minorities, women and the disabled. He selected them to be his residents, gradually shifting the power. One of these doctors spoke at my father’s memorial. Invoking the words of Dr. Martin Luther King, Jr., he said that my father walked the talk and that his personal generosity made a profound difference in the world.

In another, indelible instance, my father took me as a small child to hear Dr. Martin Luther King Jr. speak. Barely able to write my own name, I didn’t understand what was going on. Undersized and overwhelmed by the crowd, Dad placed me upon his sinewy shoulders so that I could see Dr. Martin Luther King Jr. with my own eyes. He wanted me take in the scene, witness history, and have something to build my future upon. He told me I would remember that day. I did and do… and the wisdom in this form of generosity is my compass today.

Important Things to Do

My 20 minute video, Important Things to Do, is part of a new body of dream-inspired works, invoking the liminal space where destruction and creation overlap. My research about terrestrial impact craters revealed that this is precisely the nature of these alien invaders, too; they annihilate, but also create new life. This installation explores impact crater imagery and plays upon its interpretive possibilities.

I am rereading “A Tale of Two Cities” by Charles Dickens. It couldn’t be more in tune with today — the growing chasm between the rich and poor, social and political instability, climactic shifts, wars waged on every continent alongside technological and artistic brilliance, positive cultural exchange, the elevation of women and minorities, love and kindness — darkness and brilliance coexisting, overlapping, dancing together. My hope is that light will illuminate the darkest recesses of the crater. My offering to my ancestors is to listen to their wisdom, embody their lessons, and proceed in the light.